In 1950, myself and my family moved to a new home at Fanshawe Road, Hengrove Bristol. Hengrove was a new suburb, and as more housing was needed for an increasing population in Bristol, more suburbs were being created. This was soon after World War 2, and rationing was still in place. Adjacent to where we lived was Whitchurch airport, and the airport will forever hold a special place in aviation history, as, at one stage, it was the only operational civil airport in the UK during those war years; most UK airports had been requisitioned by the military. Several well-known personalities of the time flew to/from Whitchurch in secrecy, e.g US First Lady, Eleanor Roosevelt, Bob Hope, Winston Churchill, etc. It was a hive of activity, BOAC, and KLM Royal Dutch Airlines basing their UK operations there, offering a life-line with air services to/from Spain and Portugal.

In 1959, there was a knock at the door one evening. I answered the door [I was 10 years old], and a man called Liam Nolan was asking to see my Father.

So.I asked lots of questions of my parents as to who he was. Turned out he was employed by the BBC to seek out people who could be guests on the “This Is Your Life” TV show, originally started in the US, and then franchised across the Atlantic to the UK. Eamon Andrews was the host.

On leaving school [1941], my Father, Roy Ashford had been employed by E.Thornton and Son, a shipping company based in Baldwin Street, Bristol. At that time my Mother, Mollie Hollingsworth was already working in the same offices. Soon after, Dad enlisted in the Royal Navy, and was posted to HMS Royal Arthur, Skegness, which had been a Butlin’s Holiday Camp, but had now been turned in to a training facility by the Navy. Soon after arriving, he heard a guy playing piano, who had a Bristol accent. His name was Terry Stanford [later to become Russ Conway], and Dad and Terry became good friends.

After the end of the war, and enlisted people were demobilized, Dad found his way in to a job with the Singer Sewing Machine Company, in Bristol, and in September 1947, my parents were married in Bristol. My Mother was still working at E.Thornton and Son, and this company is still operating as Thornton’s Travel, celebrating its 70 anniversary this year, having set up the travel agency within its operation in 1940. I have all my mother’s diaries from those war years, and it’s plain to see that the staff were under huge pressure being shipping agents, trying to handle shipping in Bristol City, and Avonmouth Docks.

In the 1950s, as more people bought TVs, ‘stars’ were being created, who could be viewed at home. Previously, the public would need to visit the cinema, to see their favourite stars, but now they had a new medium to see artists such as Russ Conway. Russ had not had much formal piano training, but was one of those people who instinctively had a penchant for playing an instrument, and the piano was the vehicle he chose. 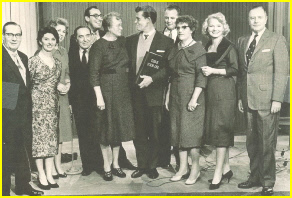 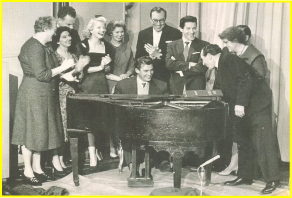 Amongst the many invited guests pictured here are:
Norman Newell, Joan Regan and Michael Holliday
Below, Peter Ashford, now of Auckland New Zealand, shares his family experiences of this unique event. 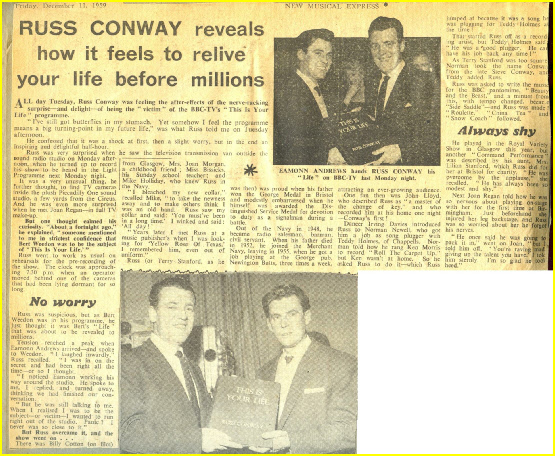 Sound Enabled Web Page
Mum and Dad were invited to London to appear on the occasion of Russ being the focused star on This Is Your Life.
I was despatched to my grandparents to stay, and we all watched the show…LIVE of course, from my grandparents
living room. That was on 7 Dec 1959.
There were various family members and friends on the show, and one star in particular, Joan Regan, was a well-known
singer at the time. Mum had a good conversation with her back-stage, and came back to Bristol saying she was a lovely
person. 1959 was a great year for Russ; he shot to stardom with No 1 hits in the UK charts, and was a major player
in the music scene. He often appeared on the Billy Cotton Band Show.

Ironically, Mum grew up in the Bedminster area of Bristol, and in the 1930s, often went to Southville Public Baths,
which is where she became friendly with the Stanford brothers, several years before she met Dad. So, in a way, it was
fitting that both my parents appeared on the show, considering it was really only Dad who was the invitee, however
Mum was called down from the audience to come on to the stage, late in the show.

In 1999, my parents went to see Russ play at the Winter Gardens, Weston-super-Mare.
That was the last time they saw him.

It seems highly fitting that Russ’s funeral was conducted at the historic St Mary Redcliffe Church, Bristol, at the time of his
death in November, 2000. He had come ‘home’.
© Peter Ashford September 2010 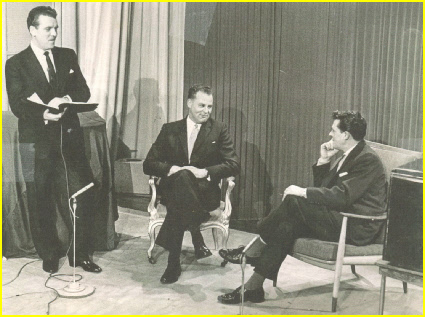 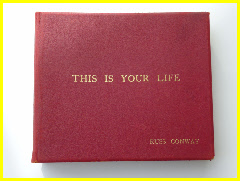 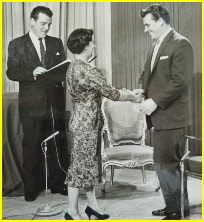 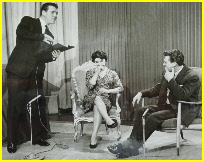 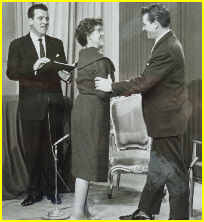 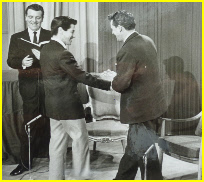 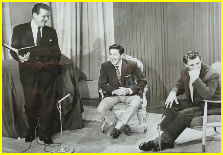 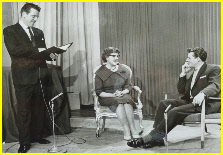 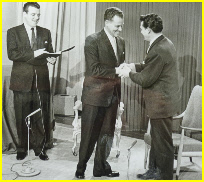 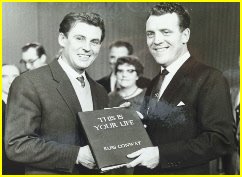 For an in-depth look at This Is Your Life, it’s presenters and the many subjects the programme featured between 1955 to 2003, visit “Big Red Book” and discover how and why the show became a national institution for it’s many regular viewers.