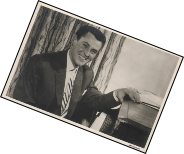 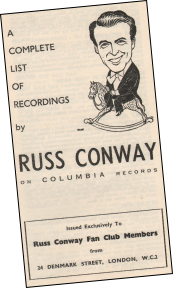 As soon as Russ hit the big time a Fan Club was set up to supposedly keep fans informed about Russ’s activities and to sell various goodies. It was run by Bill Badley who lived in Ripon in Yorkshire.

Mr Badley ran clubs for many artistes and the advent of younger pop stars widened his catchment area.  I applied to join Mr Badley’s club but no reply was forthcoming until November in 1959. The letter came from Russ and is reproduced below.

As you will read below and in some of the articles above, Russ wanted to have control over what went out in his name and also its accuracy. He closed down the club and refunded money to those who wanted it and donated the balance to The Spastics Society. The membership already stood at 2000.

There was also talk of a club being run by John Darby who lived in London’s Landsdowne Gardens but I only ever saw it in one Music Paper and as far as I know nothing else came of it. 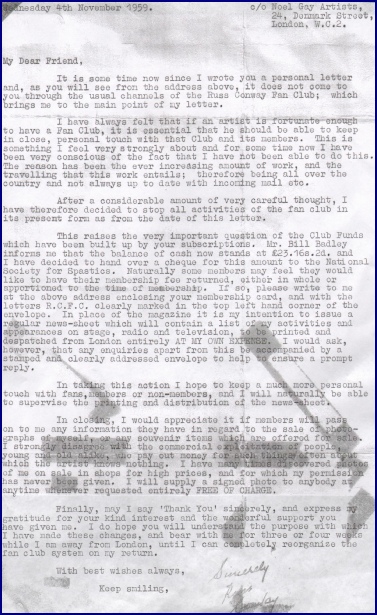 Russ was going to run the club from 24 Denmark Street, which was his agent’s office. His Road Manager, Mike Regan chose a lady called Hazel Smith to deal with the day to day running of the club and Russ oversaw all that went on. All three of them answered letters and all signed with the same name – Carol Wayne. In due time Hazel became Carol Wayne until she died and then June West took over under the name of Jay Emmy.

As Russ originally said there would be Newsletters as and when required to keep everybody informed but as things turned out later a quarterly glossy magazine would be issued in return for a five shillings annual subscription. The first edition was in August 1960. If members sent a S.A.E then a copy of the latest news sheet would be sent whenever one was needed. Sometimes they came more often than the magazine. Members also received free photographs from time to time. We all had a membership card with your number written upon it. Mine was 511, which later changed following a renumbering after gaps appeared in the membership and I became No 3. I have found out that Hazel Smith/Carol Wayne was No:1 but have yet to discover the identity of No:2.

At its peak the club had over 8000 members and as I know from forming the Appreciation Society after Russ died and the old club closed there were many more fans that just liked to see Russ from time to time but did not want to be part of a formal organisation.

Each magazine had a letter from Russ and a letter from Carol. Then there would be news about television and radio appearances, member’s letters, theatre dates, record information and so on. There would be a special guest who Russ wanted to tell us about and these were often show business friends. There would always be reviews of Russ’s performances by members who had gone to see him at a theatre or in a TV studio and there was a final reminder of where to send radio requests to get the latest release played. 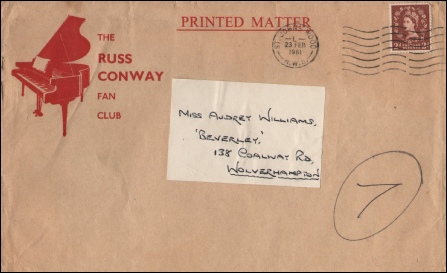 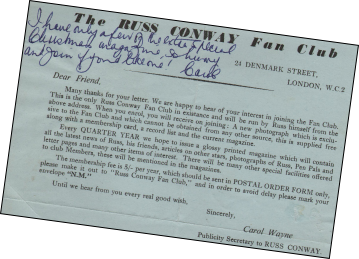 The eagerly awaited brown envelope sent to members typically contained a note from Carol Wayne, a photo,
a complete list of  recordings by Russ, unique membership card and the latest quarterly magazine. 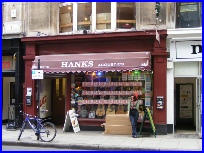 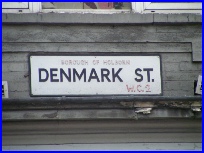 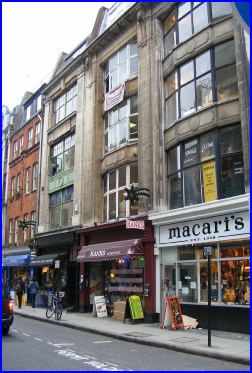 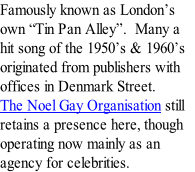 The Original Russ Conway Fan Club
operated from an office within this building.
We would now like to reproduce some of the Guest articles from the original magazines, and the first edition
guest was Billy Cotton. 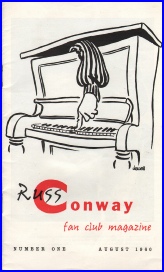 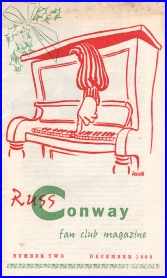 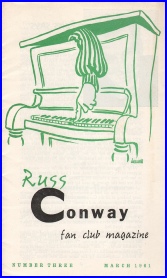 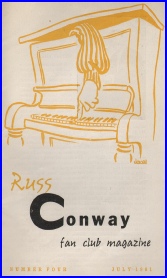 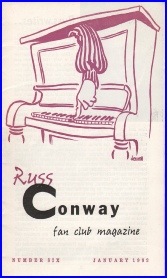 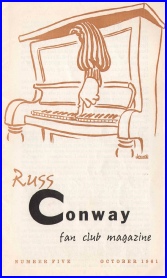 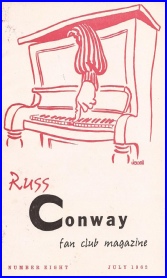 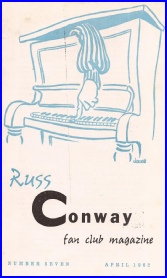 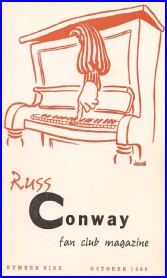 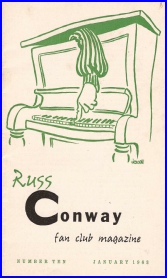 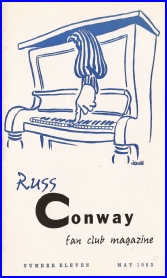 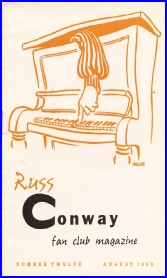