Thank you for your great site devoted to Russ

Enjoyed the pictures very much. 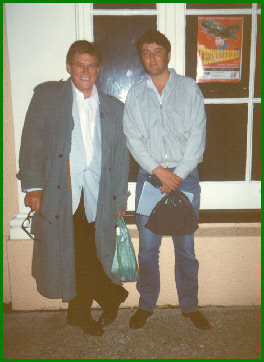 on many occasions, this is the only

photo available that records those moments.

Great you are keeping his name alive

Good to hear you have a website for Russ.

Great Website.....I am sure Russ would have approved

Still enjoy listening to the Family Favourites LP. So many great tracks.

Nice to see a site on Russ, amazed at all the photo’s.

I would like to say how good the updated site looks.

Russ was a true gentleman and a great performer, always friendly, always smiling.

As a schoolboy, I moonlighted at The Garrick Theatre in the early 60’s, Saturday and Sunday mornings they held

an open-house for showbiz people, free tea and cakes all ' round, served by actor Richard Briars, “Tea-maker To

The Stars.”  Here I met Russ Conway. He was one of the people you loved to meet, and never forgot.

Despite  stardom he remained the lovely down-to-earth man his audience and fans perceived him to be.

He loved people, and didn’t feign his interest in them. He was also great company, especially for a young teen like

me, we sat at his feet and listened in awe at Great Tales Of The Sea. Add to that he could actually play the piano,

and no wonder his star shone for so long. A privilege and an honour to have shared a short part of his life.

A Selection Of Your Comments

And Memories Of Russ

I’m Gonna Sit Right Down and Write Myself a Letter